The best way to sharpen the mind of your kid is to have an informative trivia quiz. Kids Trivial Pursuit Question is a famous game of general knowledge and pop culture questions. It has six categories including, history, science, sport, art, science, and entertainment. Based on the ability of players to answer the question the winner of the game is decided. These are some information for kids presented in this post.

There are 80+ kids trivia questions in this post about all the categories of the trivial pursuit game which will help you to boost the mind of your kid. So, let’s start the quiz and get more information. 1. Which metal is liquid at room temperature?

2. What do the eyes of Horus represent?

3. From which country the Trivial Pursuit game started?

4. On which basis the winner is decided in the game?

5. How many categories of questions are there in the game?

6. On which the game is played?

Show Answer
On a board

7. What type of questions are included in the game?

8. What is earned for each correct question?

9. When the game was first released?

11. When the online version of the game was launched?

12. How are the categories identified?

Show Answer
Through its specified color

13. What is the main object of the game?

14. What are the six categories?

15. What does the blue color show?

17. The color yellow represents what?

18. Which color represents Arts and Literature?

19. How the questions about Science and Nature are depicted?

20. What does the orange color show?

21. What other name is used for the plastic wedges in the game?

22. Which color has a shorter wave length red or blue?

23. The earth is surrounded by what?

Show Answer
The distance between two consecutive peaks of a wave

25. How much is the distance between the earth and sun?

26. Which part of an aeroplane plays a vital role in flying?

27. What is formed when lights hits water droplets in the air?

28. Are sharks belonging to mammals or fish? 29. Which birds usually fly to the south in winters?

30. Which is the world’s largest reef system?

33. In which country is the Ayers Rock (Uluru)?

34. Which process converts water from solid to liquid state?

35. What are the most common elements found in the universe?

36. Bangkok is the capital of which country?

37. What is the capital of Morocco?

39. What is an isosceles triangle?

40. Name the largest ocean on earth?

41. Which device is used to measure temperature?

43. The study of earthquakes is known as what?

44. Which product is made by bees?

45. Which two elements mainly compose the mass of earth?

46. At which temperature water boils?

48. Which state of water is called ice?

49. Which is the driest desert on earth?

50. Which bird is symbolized as peace?

51. How many letters are there in Greek alphabets?

52. What is the last letter of Greek alphabets?

53. In which playground the sport tennis is played?

55. Osaka is a city in which country?

56. Novak Djokovic is associated with which game?

57. What was the length of Titanic?

58. Ketchup is a word from which language?

59. Which insect is common in gardens? 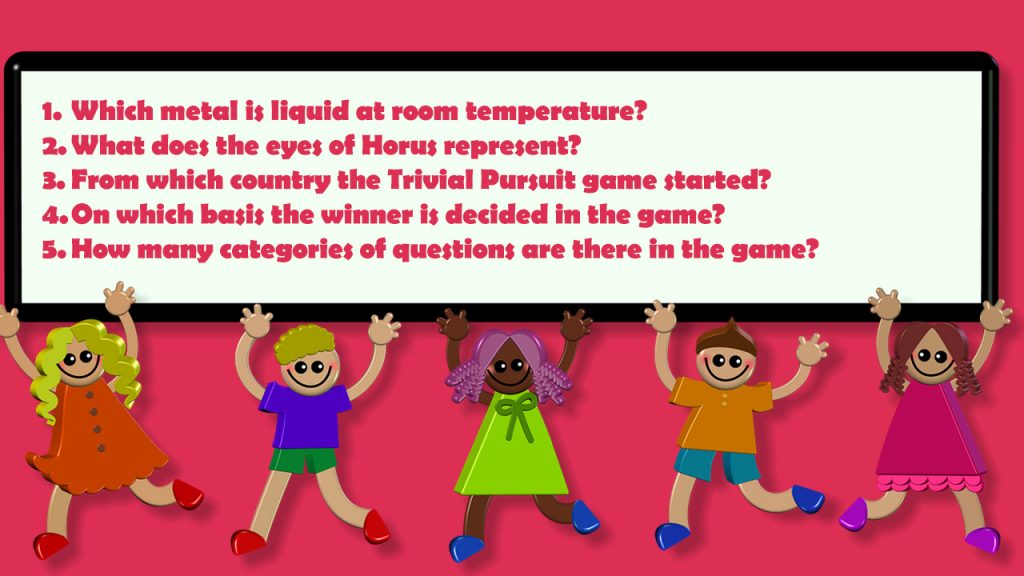 Easy Trivia Quiz Questions and Answers for Kids are the most interesting and easiest way of gathering knowledge. If you want to know about sports, animals, and literature, here is a chance for you to get information.

61. Sanosh trophy is associated with which sport?

63. Agha Khan Cup is associated with which country?

64. In which sport the ball is mostly thrown?

65. Which sport has the largest pitch area?

66. Which player has won the most trophies in Soccer?

67. What are the equipment required in a tennis game?

68. What are the three main sections of a tennis racket?

Show Answer
The head, the shaft and the grip

69. The sport ‘Golf’ started from which country?

71. What gives the green color to the leaves of a plant?

73. What are the colors in the flag of Italy?

74. What is the full name of the American politician JFK?

75. What is the national sport of Australia?

76. The famous painter belonged to which country?

77. What is the most famous art of Pablo Picasso?

78. When the Islamic terrorist group attacked the United States?

79. How many legs do butterflies have?

80. Princess Fiona is a fictional character from which animated film?

81. Who voiced the character ‘Shrek’?

82. When the movie Kung Fu Panda 3 was released?

84. Which is the most famous play of William Shakespeare?

85. What is the scientific symbol of Iron?